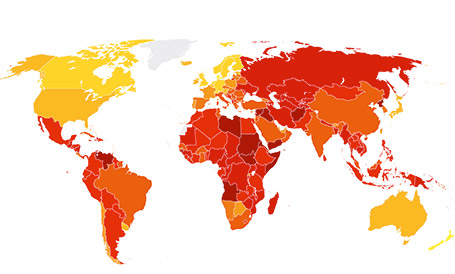 CORRUPTION PERCEPTIONS INDEX 2016: VICIOUS CIRCLE OF CORRUPTION AND INEQUALITY MUST BE TACKLED

Rise of populist politicians in many countries is a warning signal

2016 showed that around the world systemic corruption and social inequality reinforce each other, leading to popular disenchantment with political establishments and providing a fertile ground for the rise of populist politicians.

69 per cent of the 176 countries on the Corruption Perceptions Index 2016 scored below 50, on a scale from 0 (perceived to be highly corrupt) to 100 (perceived to be very clean), exposing how massive and pervasive public sector corruption is around the world. This year more countries declined in the index than improved, showing the need for urgent action.

No equal opportunities for all

Corruption and inequality feed off each other, creating a vicious circle between corruption, unequal distribution of power in society, and unequal distribution of wealth. As the Panama Papers showed, it is still far too easy for the rich and powerful to exploit the opaqueness of the global financial system to enrich themselves at the expense of the public good.

“In too many countries, people are deprived of their most basic needs and go to bed hungry every night because of corruption, while the powerful and corrupt enjoy lavish lifestyles with impunity,” said José Ugaz, Chair of Transparency International.

“We do not have the luxury of time. Corruption needs to be fought with urgency, so that the lives of people across the world improve,” added Ugaz.